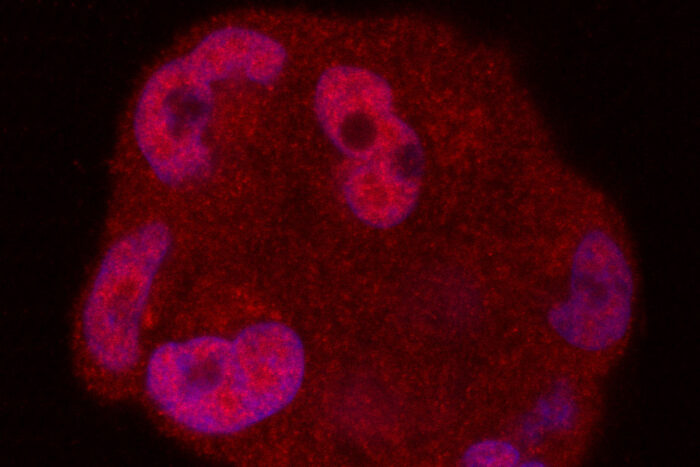 A study from Washington University School of Medicine in St. Louis has identified an RNA molecule that suppresses prostate tumors. According to the research — conducted in mice implanted with human prostate tumor samples — restoring this so-called long noncoding RNA could be a new strategy to treat prostate cancer that has developed resistance to hormonal therapies. Pictured are prostate cancer cells. The androgen receptor is shown in dark red. Cell nuclei are outlined in blue.

Many patients with prostate cancer are treated with drugs that lower or block hormones that fuel tumor growth. While the drugs are effective for a time, most patients eventually develop resistance to these therapies.

A new study from Washington University School of Medicine in St. Louis has identified an RNA molecule that suppresses prostate tumors. The scientists found that prostate cancers develop ways to shut down this RNA molecule to allow themselves to grow. According to the new research — conducted in mice implanted with human prostate tumor samples — restoring this so-called long noncoding RNA could be a new strategy to treat prostate cancer that has developed resistance to hormonal therapies.

“The drugs that we have to treat prostate cancer are effective initially, but most patients start developing resistance, and the drugs usually stop working after a year or two,” said senior author Nupam P. Mahajan, PhD, a professor of surgery in the Division of Urologic Surgery. “At that point, the options available for these patients are very limited. We are interested in addressing this need — developing new therapies for patients who have developed resistance — and we believe the RNA molecule we’ve pinpointed may lead to an effective approach.”

The drug, called (R)-9b, was developed to attack a different aspect of prostate cancer biology, knocking down expression of the androgen receptor overall rather than just blocking its ability to bind to testosterone or reducing overall testosterone levels in the body, as currently approved drugs do. But in this study, (R)-9b ended up serving as a tool to reveal the presence and role of NXTAR.

Studying human prostate tumor samples implanted in mice, the researchers showed that restoring NXTAR expression caused the tumors to shrink. They also showed that they didn’t need the entire long noncoding RNA to achieve this effect. One small, key section of the NXTAR molecule is sufficient for shutting down the androgen receptor.

“We are hoping to develop both this (R)-9b drug and NXTAR into new therapies for prostate cancer patients who have developed resistance to the front-line treatments,” Mahajan said. “One possible strategy is to encapsulate the small molecule drug and the key piece of NXTAR into nanoparticles, perhaps into the same nanoparticle, and shut down the androgen receptor in two different ways.”

Mahajan worked with Washington University’s Office of Technology Management to file a patent application on potential uses of NXTAR as therapeutics. In addition, the Moffitt Cancer Center in Tampa, Fla., where Mahajan was a faculty member before joining Washington University, has filed a patent application on the (R)-9b drug. The (R)-9b inhibitor has been licensed to a biotechnology startup company called TechnoGenesys. Mahajan and co-author Kiran Mahajan are co-founders of the company.