Long non-coding RNAs (lncRNAs) represent the leading edge of cancer research, and have been implicated in cancer biogenesis and prognosis. Researchers at The University of Hong Kong aimed to identify lncRNA signatures that have prognostic values in glioblastoma multiforme (GBM). Using a lncRNA-mining approach, they performed lncRNA expression profiling in 213 GBM tumors from The Cancer Genome Atlas (TCGA), randomly divided into a training (n=107) and a testing set (n=106). They analyzed the associations between lncRNA signatures and clinical outcome in the training set, and validated the findings in the testing set. The researchers also validated the identified lncRNA signature in another two independent GBM data sets from Gene Expression Omnibus (GEO), which contained specimens from 68 and 101 patients, respectively. They identified a set of six lncRNAs that were significantly associated with the overall survival in the training set (P≤0.01). Based on this six-lncRNA signature, the training-set patients could be classified into high-risk and low-risk subgroups with significantly different survival (HR=2.13, 95% CI=1.38-3.29; P=0.001). The prognostic value of this six-lncRNA signature was confirmed in the testing set and the two independent data sets. Further analysis revealed that the prognostic value of this signature was independent of age and O-6-methylguanine-DNA methyltransferase (MGMT) promoter methylation status. The identification of the prognostic lncRNAs indicates the potential roles of lncRNAs in GBM pathogenesis. This six-lncRNA signature may have clinical implications in the subclassification of GBM. 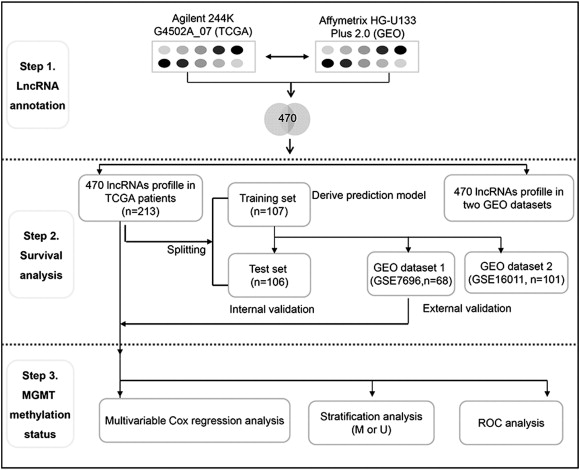